Acer rubrum 'Autumn Flame' is a male cultivar of Red Maple, presenting a brilliant scarlet fall color lasting several weeks. It is often one of the first trees to color up in autumn, and it puts on one of the most brilliant displays of any tree.  Leaves persist longer in this cultivar than the species.  It is a fast grower with strong wood, reaching a height of 45 to 50 feet. The crown is denser and more uniform than the species.

While it makes its best growth in wet place, it has no other particular soil preference except chlorosis may develop on alkaline soil where it also grows poorly.  It is well-suited as a street tree in northern and mid-south climates in residential and other suburban areas.  They make a good street tree, as they are tolerant of compacted soils, and have a less aggressive root system than silver or other maples that can raise sidewalks.  Surface roots beneath the canopy can make mowing difficult.

Red Maple is easily transplanted. It is not especially drought tolerant in the southern part of the range, but selected individual trees can be found growing on dry sites. This trait shows the wide range of genetic diversity in the species.

‘Autumn Flame’ is a male selection that is noted for (1) abundant leaves that are smaller in size than those of the species, (2) fall color that develops about two weeks prior to fall color on the species and (3) excellent scarlet fall color. Greenish-yellow flowers appear in early spring (March). No fruit is produced (samaras, or 'helicopters', as they are often referred to). Leaves (to 3” long) with 3-5 lobes are green above and glaucous green with a blue-gray bloom beneath. Fall color is a brilliant scarlet. 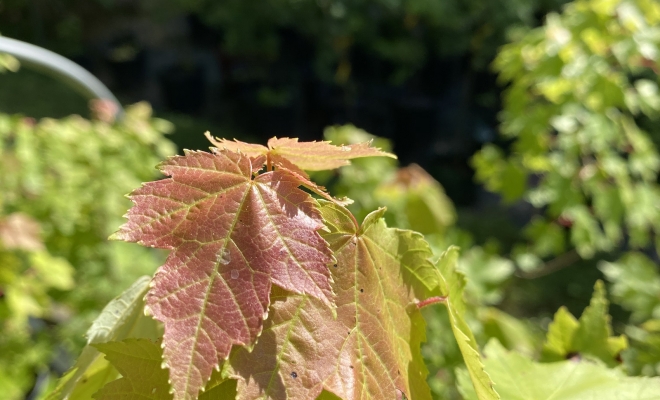