Amianthium muscaetoxicum, Fly poison is a perennial plant with wide, grass-like basal leaves. Flowers are initially white in colour, later becoming green or red. The 3-petaled flowers (plus 3 sepals) are clustered in a dense raceme on top of a 1-3 foot tall leafless stalk. Fly poison is one of the first herbaceous species to emerge in early spring. It is typically found in dry to moist woods, meadows, and open fields. It used to be common throughout the Eastern United States, from New York south to Florida and as far west as Oklahoma and Missouri. It is considered a threatened species in some areas of Tennessee. It is a plant that appears to be gradually declining in nature, due largely to habitat loss.

Although all parts of the plant contain toxins, the bulbs are the most toxic.  The alkaloids in the plant act as neurotoxins commonly affect sheep and cattle when ingested. Other livestock can be affected as well, including goats and rabbits. Obviously, people should not eat it.

Early American settlers ground the bulb into a paste and mixed it with sugar or honey to attract and kill flies.

Fly poison is similar in appearance to two other North American wildflowers that are also in the Melanthiacaea family. The eastern turkeybeard (Xerophyllum asphodeloides) can be found growing in the same areas as fly poison and has basal leaves and a long stalk bearing a plume of white flowers. However, turkeybeard has much narrower leaves and the flower cluster is typically more rounded.

Despite it's toxicity, it's a beautiful plant. Just don't eat it. 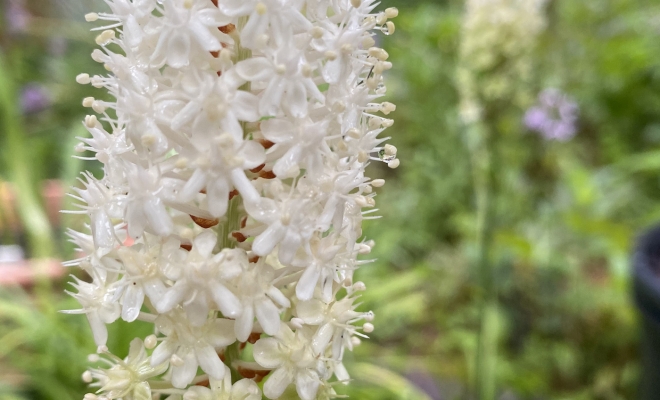