Asplenium platyneuron (ebony spleenwort) is a spleenwort with a disjunct distribution in two (now 3) continents. In North America it is native almost throughout the eastern United States, east of the Rockies.  Oddly enough, it is also known from south Africa.

The fertile fronds, which die off in the winter, are darker green and stand upright, while the sterile fronds are evergreen and lie flat on the ground. An auricle at the base of each pinna points towards the tip of the frond. The dimorphic fronds and alternate, rather than opposite, pinnae distinguish it from the similar black-stemmed spleenwort.

Ebony spleenwort produces vegetative buds and is thus capable of proliferating by forming new plantlets from buds on the rachis at the base of the plant. These allow new individuals to form at different levels when prostrate fronds become buried in the leaf litter (Wagner & Johnson, 1993).  It is also well-adapted to propagate by spores, as the upright fertile fronds help the spores enter the airstream for long-distance dispersal, and the gametophytes can self-fertilize with a high degree of success. This dispersal ability seems to have helped the species spread rapidly in the Great Lakes region in the late 20th century. Long-distance dispersal may also explain its naturalized appearance in South Africa; the same mechanism may have given rise to an isolated population found in Slovakia in 2009, its first known occurrence in Europe (Wikipedia).

This is a very delicate looking, but tough fern, with lovely ebony-colored stipes.  It's great addtion to the small garden, or for growing in crevices in rocks.  To establish it in these conditions, make certain that it is watered well and frequently until it sends roots down into the crevice. 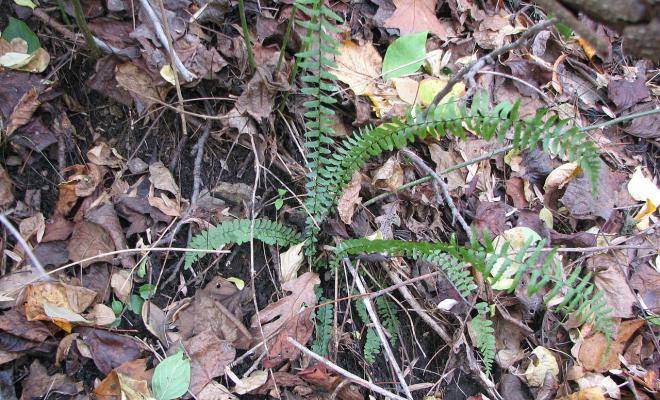