Dennstaedtia punctilobula, the eastern hayscented fern or hay-scented fern, is native to eastern North America, from Newfoundland west to Wisconsin and Arkansas, and south in the Appalachian Mountains to northern Alabama; it is most abundant in the east of its range, with only scattered populations in the west.

It is a deciduous fern with light, lacy fronds that grow to 40–100 cm (rarely 130 cm) tall and 10–30 cm broad; the fronds are bipinnate, with pinnatifid pinnules about three times as long as broad. It occurs in damp or dry acidic soils in woods or open woods, from sea level up to 1,200 m altitude.

Dennstaedtia punctilobula can exhibit varying degrees of phototropism. The common name "Hay-scented Fern" comes from the fact that crushing it produces an aroma of fresh hay.

The presence of Dennstaedtia punctilobula can influence the understory vegetation of many forests in the eastern United States.  It is a superb plant to grow where you want to outcompete such invasives as Asiatic stilt grass, garlic mustard, and others.  It is not browsed by deer, and can take over understories that are comprimised.  It also tolerates full sun, and can colonize areas where timber harvests have occured.  Where hayscented fern becomes common, tree seedling establishment can even become restricted. 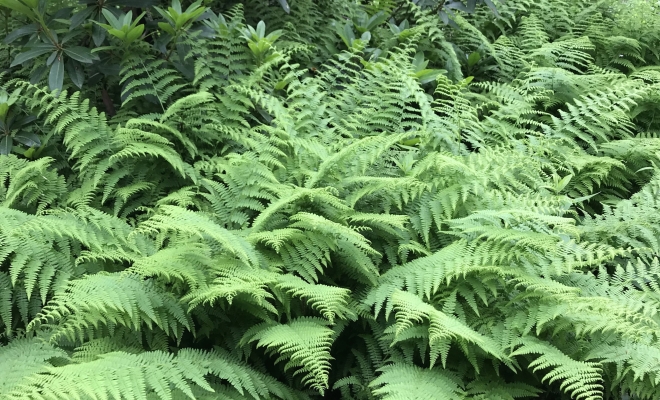