Dioscorea villosa is a twining tuberous vine which is native to eastern North America. It is commonly known as wild yam, colic root, rheumatism root, devil's bones, and fourleaf yam. It is common and widespread in a range stretching from Texas and Florida north to Minnesota, Ontario and Massachusetts. It is currently on the United Plant Savers "At Risk" list. UpS is an organization concerned with the preservation of endangered medicinal plants on the territory of North America.

Grow this attractive vine (mainly for the beautiful, satin leaves) in the shady garden, in a humus substrate, and it would appreciate a small tree, tuteur or trellis upon which to climb. Dioscorea villosa is, according to the Flora of North America, quite variable in shape across its range. It ranges from a small vine with winged stems, tightly packed groups of flowers, variably hairy leaves all the way up to large vines with unwinged stems, large, smooth leaves, and widely spread sprays of flowers. It always has rhizomes spreading underground that can be branched or not.

Dioscorea villosa contains diosgenin, which despite claims is not a phytoestrogen and does not interact with estrogen receptors. Other steroidal saponins are also found in the plant.

There is little modern clinical research on Dioscorea villosa, and the one study of a wild yam-containing cream for menopausal symptoms failed to find any value from this therapy. According to the American Cancer Society, there is no evidence to support wild yam or diosgenin being either safe or effective in humans. 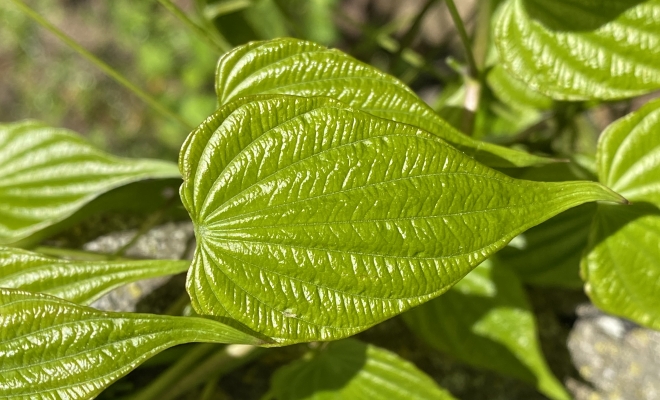