Gymnocladus dioica, commonly referred to as Kentucky coffeetree or coffeetree, is a tall deciduous tree with rough, scaly gray-brown bark and large bipinnate compound leaves.  It is native to the Midwest, primarily southern Michigan and Ohio southwest to Iowa, Kansas, Oklahoma and Arkansas.  It grows 60-80’ (less frequently to100’) tall with an irregular open oval to obovate crown. It often occurs in low or rich woods, bluff bases and along streams. Large leaves to 3’ long, divided into 3-7 pairs of pinnae, with individual leaflets (1-3” long).  Leaflets are blue-green in summer, turning an undistinguished yellow in fall.  Larger trees typically cast light shade. As the specific epithet suggests, the species is dioecious (separate male and female trees).  Greenish white flowers appear in late spring (May-June).  Male flowers in clusters to 4” long.  Female flowers in panicles to 12” long. Female flowers are fragrant.  Fertilized female flowers give way to flattened reddish brown pods (to 10”long) which ripen in October and persist well into winter.  Native Americans and early American settlers, especially those in the Kentucky territory, roasted and ground the seeds to brew a coffee-like beverage (albeit no caffeine), hence the common name.  Native Americans roasted the seeds for food. Seeds are very toxic prior to roasting, and should never be eaten fresh off the tree.  Trees are late to leaf out in spring and are one of the first to drop leaves in the fall.

With its bold form, contorted branching, unique bark and decorative clusters of large pods rattling in the wind, Kentucky coffeetree is an exceptional winter ornamental.  The leaves emerge in late spring a striking pink-bronze color.  As the large airy leaves mature they become dark bluish-green above.  The light, airy shade (semi-shade) of this tree makes gardening under it possible. This tree's yellow fall color contrasts nicely with the clusters of dark, maturing pods.

This urban-tolerant tree is adaptable to a wide range of soils and climates, and will survive in dry, compacted or alkaline soil.  The Kentucky coffeetree prefers full sun and moist, rich soils.  It has no serious disease or insect problems.  Litter can be a problem in spring when pods fall, and in autumn when the large leaves drop.  Because of the litter, Kentucky coffeetree is best suited for large expanses like parks.

The genus name comes from gumnos meaning naked and klados meaning branch as the tree is bare of leaves for many months.

Ours were grown from seed. 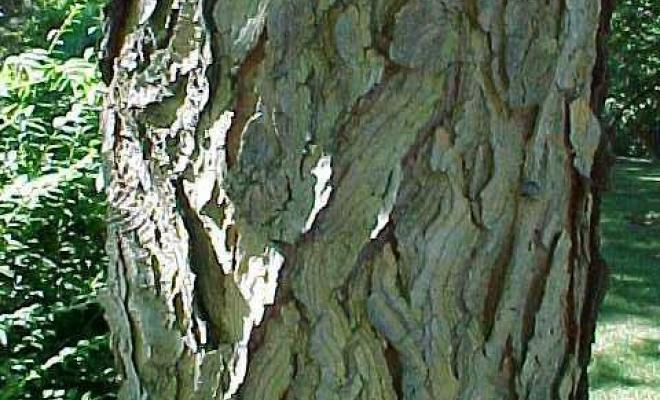