Ilex glabra, commonly called inkberry holly is a slow-growing, upright-rounded, stoloniferous, broadleaf evergreen shrub in the holly family. It typically matures to 5-8’ tall, and can spread by root suckers to form colonies. It is native to the coastal plain from Nova Scotia to Florida to Louisiana where it is most commonly found in sandy woods and peripheries of swamps and bogs. Spineless, flat, ovate to elliptic, glossy, dark green leaves (to 1.5” long) have smooth margins with several marginal teeth near the apex. Leaves usually remain attractive in winter unless temperatures dip well below zero. Greenish white flowers (male in cymes and female in cymes or single) appear in spring, but are relatively inconspicuous. If pollinated, female flowers give way to pea-sized, jet black, berry-like drupes (inkberries to 3/8" diameter) which mature in early fall and persist throughout winter to early spring unless consumed by local bird populations. Gallberry honey is a highly-rated honey that results from bees feeding on inkberry flowers. This honey is locally produced in certain parts of the Southeastern U.S. in areas where beekeepers release bees from late April to early June to coincide with inkberry flowering time. Dried and roasted inkberry leaves were first used by Native Americans to brew a black tea-like drink, hence the sometimes used common name of Appalachian tea for this shrub.

It is easily grown in average, medium to wet soils in full sun to part shade. Adaptable to both light and heavy soils. Tolerates wet soils. Prefers rich, consistently moist, acidic soils in full sun. Good shade tolerance, however. Avoid neutral to alkaline soils. Inkberries are dioecious (separate male and female plants). Female plants need a male pollinator in order to produce the berry-like drupes that are characteristic of the species and cultivars. Prune to shape in early spring just before new growth begins. Plants generally need minimal pruning unless used as a hedge (perhaps best grown as an informal hedge). Remove root suckers regularly if colonial spread is not desired

We carry the cultivars Ilex glabra 'Shamrock' and "compacta" which typically have better form (shinier leaves, more compact, less open, less leggy and less suckering) than the species. We have a few of the straight species.

Excellent for shrub borders, foundation plantings or as a low hedge. Also effective naturalized in moist woodland gardens or in moist locations near streams or ponds. This species is noted for its ability to perform well in wet sites. It can be massed or grouped.

There are no serious insect or disease problems. Leaf spot is an occasional problem. Spider mites may appear under very not, dry conditions.  Chlorosis (yellowing of leaves) can occur in high pH (alkaline) soils. 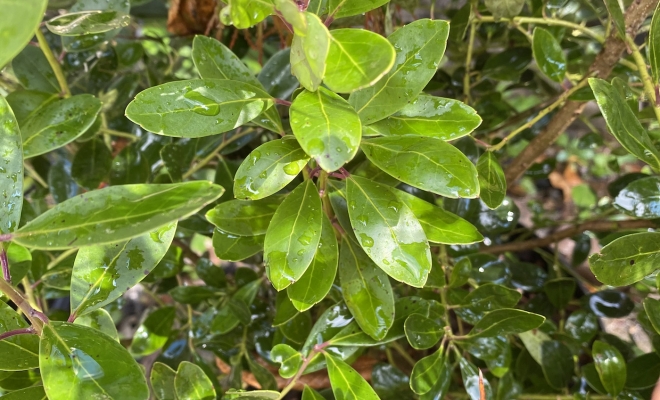