Metasequoia glytostroboides, the dawn redwood is a most exceptional species. Beautful verdant foliage in the spring, braided trunk relief and attractive orange needles in the fall. Thought to be extinct until discovered in one valley in China. Fast growing and disease resistant. Tolerates wet soils, but does well in most average soils, as well.  This plant was at one time indigenous to North America (60 to 1.5 million years ago), but went extinct, likely due to a changing climate and competition with species more well adapted to the changing conditions.  Zones 4 - 8.

Together with Sequoia sempervirens (Coast Redwood) and Sequoiadendron giganteum (Giant Sequoia) of California, M. glyptostroboides is classified in the subfamily Sequoioideae of the family Cupressaceae. Although it is the only living species in its genus, three fossil species are known. The other Sequoioideae and several other genera have been transferred from the Taxodiaceae to the Cupressaceae based on DNA analysis.

While the bark and foliage are similar to another closely related genus of redwoods, Sequoia, M. glyptostroboides differs from the coast redwood in that it is deciduous, like Taxodium distichum (bald cypress). Similar to Taxodium, older trees may form wide buttresses on the lower trunk. Metasequoia is a fast-growing tree, exceeding 35 m (115 ft) in height and 1 m (3.3 ft) in trunk diameter by the age of 50, in cultivation (with the potential to grow to even greater dimensions). The trunk forms a distinctive "armpit" under each branch, making the trunk appear almost braided. The bark is vertically fissured and tends to exfoliate in ribbon-like strips.

In Lichuan, Hubei, there is a dawn redwood forest consisting of barely 5,000 trees (by another count, around 5,400 trees, and some smaller groups (typically, under 30 trees each).  Since its discovery, the dawn redwood has become something of a national point of pride, and it is protected under Chinese law and also planted widely. However, it is still listed as endangered in the wild. Cutting of trees or branches is illegal, but the demand for seedlings drives cone collection to the point that natural reproduction is no longer occurring in the dawn redwood forest. The species will continue to live in yards, parks and on roadsides all over China, but the M. glyptostroboides forest ecosystem could disappear when its mature trees die (probably not).

Pizhou, Jiangsu boasts the longest dawn redwood avenue in the world. The avenue is approximately 60 km long with purportedly over one million trees.

Interestingly, recent research indicates that 37 to 47 million years ago, Metasequoia was found growing in extensive forests in the arctic around Ellesmere Island. Atmospheric CO2 levels at that time were estimated to be around 424 ppm. (Old Molecules, New Climate: Metasequoia’s Secrets - Arnoldia – Volume 76, Issue 2)

Today, they are nearly that (421 ppm in Sept. 2022), and the arctic is warming rapidly. You may judge the implications of those data for yourself. 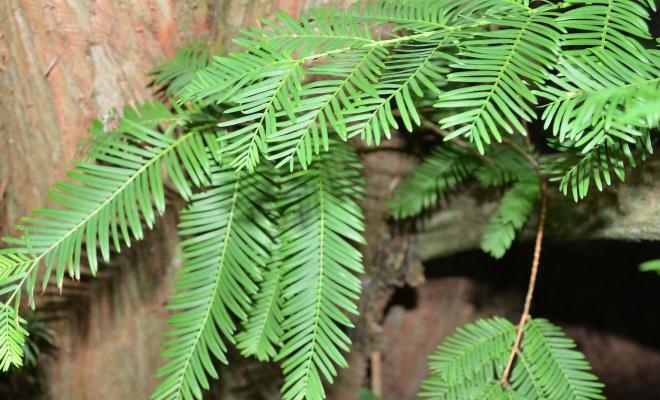