Mitchella repens, or Partridge Berry, is the best known plant in the genus Mitchella. It is a creeping, prostrate, herbaceous plant, or non-climbing vine occurring in North America.  The evergreen, dark green, shiny leaves are ovate to cordate in shape, with a pale yellow midrib. The petioles are short, and the leaves are paired oppositely on the stems. Adventitious roots may grow at the nodes; and rooting stems may branch and root repeatedly, producing loose spreading mats.

The small, trumpet-shaped, axillary flowers are produced in pairs, and each flower pair arises from one common calyx which is covered with fine hairs. Each flower has four white petals, one pistil, and four stamens. Partridge Berry plants have either flowers with long pistils and short stamens (long-styled flowers, called the pin), or have short pistils and long stamens (short-styled flowers, called the thrum). The ovaries of the twin flowers fuse, so that there are two flowers for each berry. The two bright red spots on each berry are vestiges of this process.

The fruit ripens between July and October, and may persist through the winter. The fruit is a drupe containing up to eight seeds. The fruits are never abundant. They may be part of the diets of several birds, such as ruffed grouse, sharp-tailed grouse, northern bobwhite, and wild turkey. They are also consumed by foxes, white-footed mice, and skunks.  The foliage is occasionally consumed by White-tailed deer.

The common reproduction is vegetative, with plants forming spreading colonies.

This plant was used by native Americans and colonists to induce and/or facilitate labor during childbirth, as it apparently contains substances that help to tone the uterus, and increase sensitivity to oxytocin.  It was used as an astringent, diuretic, parturient and styptic, as well as to ease menstrual cramps, help with labor pains and ease delivery. 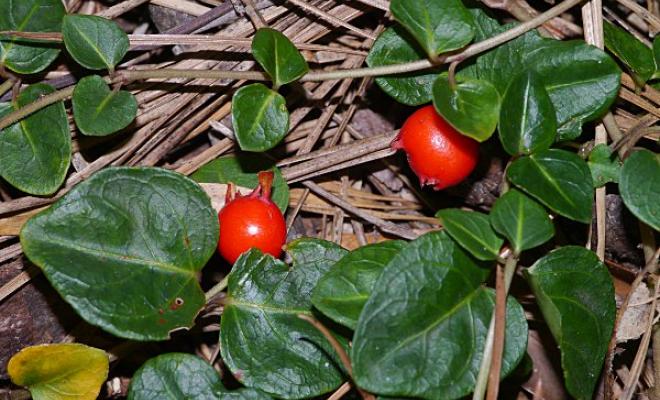