Oenothera biennis (Common evening primrose or Evening star) is native to eastern and central North America, from Newfoundland west to Alberta, southeast to Florida, and west to Texas.  It is a vigorous grower, very tolerant of poor soils, and reseeds easily. It is robust and tall and is probably more attractive in the meadoow rather than the formal garden.

The genus name is unclear but may have come from the Greek words oinos and theras, meaning wine-seeker in probable reference to an ancient use of the roots of genus plants in scenting wine. The specific epithet means two years (a biennial).

It is a tall plant which can be grown in poor, dryish soils, and pollinated by night-flying moths (like the primrose moth.

From Wikipedia: Virtually all plant parts are edible. In general, the taste of the plant is mild but sometimes there can be a rough aftertaste.

The roots can be eaten raw or cooked like potatoes. They can be used from the young plant, until the first flowering stem is developed. If soaked in water and boiled the taste is similar to black salsify root.

The flowering stems are preferably used when they are still young in June. They have to be peeled and can then be eaten raw or fried. The flower buds are denoted as delicacy and can be harvested from June to September. They are mild in taste and can be eaten raw in salads, pickled in oil, fried or in soups. The flowers themselves are edible as well and have a sweet taste. They can be used as garnish for salads but also in desserts. When the fruits are still green in August and September they can be used similar to the flowering stems.

The seeds have a protein content of about 15%, an oil content of 24% and contain about 43% cellulose. The proteins are especially rich in the sulphur-containing amino acids methionine and cysteine, as well as in tryptophan - all essential amino acids. There is a relative deficiency in lysine and four other essential amino acids. The nutrient of greatest interest is gamma-linolenic acid (GLA), a polyunsaturated fatty acid. For this reason evening primrose oil is a widely sold dietary supplement. The whole seeds can also be used similar to sesame roasted and in pastries. Be careful! Know what you are eating!

The whole plant and especially the leaves were boiled to tea by Native American tribes as a stimulant to treat laziness and against “over fatness”. The tribes also used the roots externally to treat piles and boils. Additionally, they were chewed and rubbed onto the muscles to improve strength.  Read Wikipedia and other references for more information. 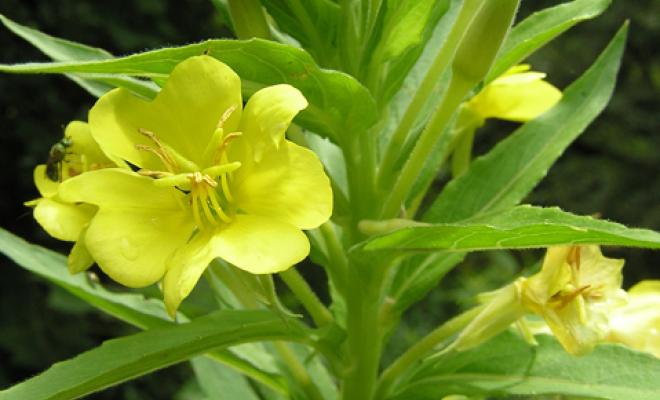