Ptelea trifoliata, commonly called the hop tree, is a dense, rounded, eastern native, deciduous shrub or small tree which occurs in open woods, glades, ravines, thickets and prairies. It typically grows to 10-20' tall, features compound, trifoliate, shiny, dark green leaves (each leaflet is 2-5" long) which turn greenish yellow in autumn. Terminal clusters (cymes) of tiny white flowers appear in late spring, but are not particularly showy. Carrion flies pollinate the flowers. Flowers give way to pendulous seed clusters, each seed being encased in a thin, circular, winged disc (1" diameter samara). The seeds mature to brown in late summer and persist through most of the winter. This tree has some descriptive common names inluding hop tree (in reference to a prior use of the seeds as a substitute for hops), and wafer ash (in reference to the thin, wafer-like appearance of the seed.

It is one of the few native trees that hosts caterpillars of the Giant Swallowtail and the Eastern Black Swallowtail.  Brewmasters use its fruit is a substitute for hops in beer-making.The species is easily grown in average, dry to medium, well-drained soils in part shade to full shade. It tolerates full sun, and is adaptable to wide range of growing conditions.(Another host tree for the balck swallowtail is Prickly Ash, Zanthoxylum americanum, which grows from zone 3 to below the Mason-Dixon line and west to Nebraska.) Other host plants of the black swallowtail include cow parsnip, dill, fennel, forked scaleseed, golden Alexanders, northern water hemlock ( poisonous), parsley, parsnip, poison hemlock, Queen Anne’s lace, rue, and yarrow.

Ptelea adapts to almost any soil and sun situation. There are no serious insect or disease problems, although there is some susceptibility to leaf spotting.

This tree or multistemmed large shrub can be used as a specimen or in groups. It can be effective as a large, informal hedge or screen. 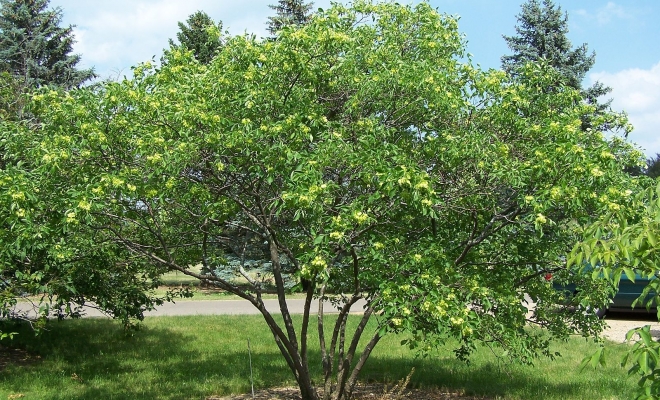 We are a small local nursery with limited shipping capability. We will do our best to ship smaller material (usually quarts, 1 or 2 gallons), although we can sometimes ship larger plants with the pots removed.