Trillium grandiflorum, commonly known as great white trillium or wood lily, is a simple, graceful perennial that is one of the most familiar and beloved of the spring woodland wildflowers in eastern North America. Or, it used to be. Bofore the multiflora rose, Japanese honeysuckle and overpopulation of deer.  It is native to rich woods and thickets from Quebec to Ontario to Minnesota south to Alabama and Georgia. Leaves, petals and sepals all come in groups of three. From an underground rhizome, a stout, unbranched, naked stem rises in spring to 8-18" tall topped by an apical whorl of three prominently-veined, ovate to egg-shaped, green leaves (each typically to 3-4" long but sometimes to 6"). From the center of the leaf whorl emerges a single flower in April-May on an erect to leaning stalk rising above the leaves to 2-3" tall (pedunculate). Each flower (to 3 1/2" across) has three flaring, ovate, wavy-edged, white petals subtended by three smaller green sepals. Flower petals are reflexed at the tips. Flowers acquire pink tones with age. Flowers give way to berry-like capsules. Seeds are disbursed by ants, which collect them for the fatty bodies on the seeds called elaiosomes. Foliage will usually die to the ground by late summer, particularly if soils are allowed to dry. Additional common names for this trillium include large-flowered trillium and wake-robin.

Easily grown in deep, rich, humusy, moist but well-drained soils in part shade to full shade. Needs regular watering if dry. Apply leaf mulch (no more than 2") in the fall. This rhizomatous plant can be slow and difficult to propagate from seed taking 3 to 5 years before it blooms. It spreads very gradually if left undisturbed. Ours are 3 - 4 years, from seed.

The genus name comes from the Latin word tres meaning three in reference to the leaves, petals and sepals all coming in groups of three. 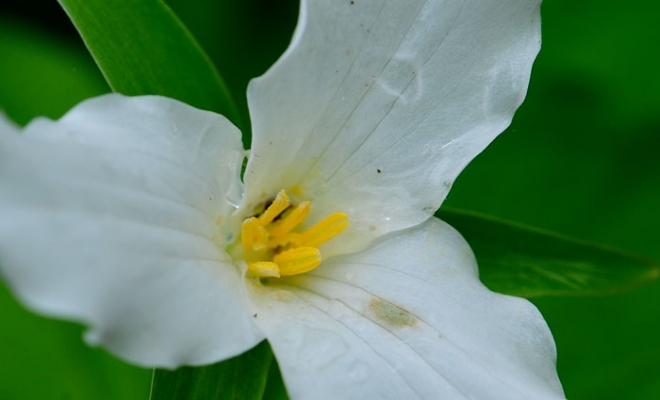